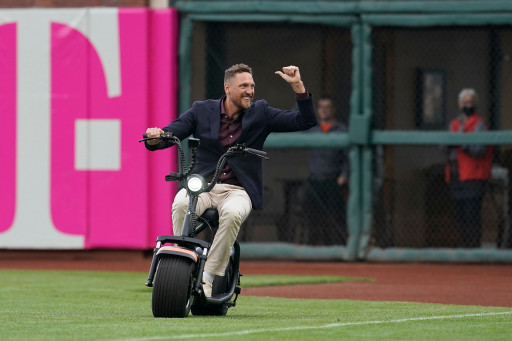 
Two-time World Champion with the San Francisco Giants in 2012 and 2014, Hunter Pence has taken the cause of ocean conservation and climate resilience seriously. On Oct. 24, 2022, World United Nations Day, he will be delivering the keynote address at the Blue Carpet Blue Marble Awards ceremony scheduled at the San Jose City Hall Rotunda, hosted by the Smithsonian-affiliated Aquarium of the Bay. Famously riding an electric scooter to reduce his carbon impact, Pence has been a fierce and passionate campaigner for eliminating ocean plastics, shoreline cleanups, eating veggies, planting trees and reducing greenhouse gas emissions.

The Smithsonian-affiliated aquarium is part of the non-profit Bay Ecotarium, celebrating its 41st anniversary of ocean conservation and climate advocacy and undergoing a major transformation into the world's most comprehensive climate-resilient and sustainable ocean living museum that will engage indigenous voices in its awareness campaign to mitigate the greatest existential threat faced by humanity today. First Lady Dr. Jill Biden delivered the keynote at the unveiling of the vision in San Francisco.

With a welcome address by San Jose Mayor Sam Liccardo and opening remarks by Silicon Valley leader George Kurian, Chief Executive Officer of NetApp, the event will honor California's climate and ocean heroes who have made a difference in the communities they serve and the causes that they uphold in strengthening our environment, in more ways than one. ABC7 News anchor Dan Ashley will be the master of ceremonies for the evening, with live music performances by multi-Grammy winners Rickey Kej and Lonnie Park, along with live jazz performances by Radio Gatsby. "We are delighted to host Hunter Pence, Mayor Sam Liccardo and NetApp CEO George Kurian as they grace the World UN Day. This is an important endorsement to climate awareness and informed sustained action," said George Jacob, FRCGS, President and CEO of Bay Ecotarium in San Francisco.

Tickets are available at www.bayecotarium.org.