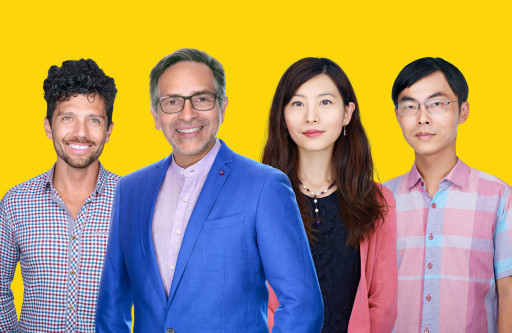 
The Vilcek Foundation has announced the recipients of the 2023 Vilcek Foundation Prizes in Biomedical Science. Awarded annually since 2006, the prizes recognize immigrant scientists at the forefront of their fields, and celebrate the importance of immigrant contributions to scientific research and discovery in the United States. In 2023, the foundation awards a total of $250,000 to Alejandro Sánchez Alvarado (b. Venezuela), Edward Chouchani (b. Canada), Biyu J. He (b. China), and Shixin Liu (b. China).

The Vilcek Prize in Biomedical Science

Alejandro Sánchez Alvarado is executive director and chief scientific officer of the Stowers Institute for Medical Research, and a Howard Hughes Medical Institute Investigator. He receives the Vilcek Prize in Biomedical Science for his contributions to the field of regeneration—from the identification of crucial genes that control regeneration in living organisms to the potential for regenerative medicine to address how we treat disease in humans. Born in Caracas, Venezuela, Sánchez Alvarado immigrated to the United States to pursue his bachelor's at Vanderbilt University before going on to complete his Ph.D. in pharmacology and cell biophysics at the University of Cincinnati School of Medicine.

"Alejandro Sánchez Alvarado has devoted his career to understanding the fundamental molecular and cellular bases of regeneration, from the specific genes responsible for regeneration to epigenetic regulators that compel the expression of these genes," said Vilcek Foundation Chairman and CEO Jan Vilcek. "Using a freshwater flatworm—an organism called Schmidtea mediterranea—as a powerful experimental tool to study the molecular mechanisms of tissue regeneration, he has pioneered and expanded the field of regeneration. His work has broad applications for our understanding of the pathology of degenerative disease."

The Vilcek Prizes for Creative Promise in Biomedical Science

Edward Chouchani, Biyu J. He, and Shixin Liu are the recipients of the 2023 Vilcek Prizes for Creative Promise in Biomedical Science.

Edward Chouchani is an associate professor of cancer biology at the Dana-Farber Cancer Institute and an associate professor of cell biology at Harvard Medical School. He is a cofounder and board member of Matchpoint Therapeutics, a biotechnology company focused on the development of precision medicine. Born in Ottawa, Canada, Chouchani earned his bachelor's at Carleton University and his Ph.D. in biological sciences at the University of Cambridge. He receives the Vilcek Prize for Creative Promise in Biomedical Science for his work to decipher the molecular mechanisms that drive metabolic disease, with the aim of developing therapeutic interventions targeted at the molecular drivers of metabolism within cells.

Biyu J. He is an assistant professor of neurology, neuroscience and physiology, and radiology at the NYU Grossman School of Medicine, and principal investigator of the Perception and Brain Dynamics Laboratory at NYU Langone Health. Born in Xinxiang, China, Biyu J. He immigrated to the United States to pursue her Ph.D. in neuroscience at Washington University in St. Louis. She receives the Vilcek Prize for Creative Promise in Biomedical Science for her research leadership in the field of cognitive neuroscience, and for her groundbreaking work on the biological bases of perceptual cognition and subjective experience.

Shixin Liu receives the Vilcek Prize for Creative Promise for applying cutting-edge biophysical tools to directly visualize, manipulate, and understand the physiological function of nanometer-scale biomolecular machines including DNA replication and transcription complexes at the single-molecule level. Liu is an associate professor at The Rockefeller University, where he has been the head of the Laboratory of Nanoscale Biophysics and Biochemistry since 2016. Born in Anhui province in China, he immigrated to the United States to pursue his Ph.D. in chemistry at Harvard University.

The Vilcek Foundation raises awareness of immigrant contributions in the United States and fosters appreciation for the arts and sciences. The foundation was established in 2000 by Jan and Marica Vilcek, immigrants from the former Czechoslovakia. The mission of the foundation was inspired by the couple's respective careers in biomedical science and art history. Since 2000, the foundation has awarded over $7 million in prizes to foreign-born individuals and has supported organizations with over $5.8 million in grants.

Statement on the Pediatric Surge From Federally Funded Pediatric Groups